Marcopolo G8 “Made in Colombia” has arived.

ONE OF THE MOST ANTICIPATED LAUNCHES OF 2022

A year ago, the virtual presentation of the most recent generation of the Brazilian coach-builder Marcopolo revolutionized the bus world, thanks to the aerodynamic shape, the technological solutions, the finishing details and the superior level of development that the new model represented for the brand. 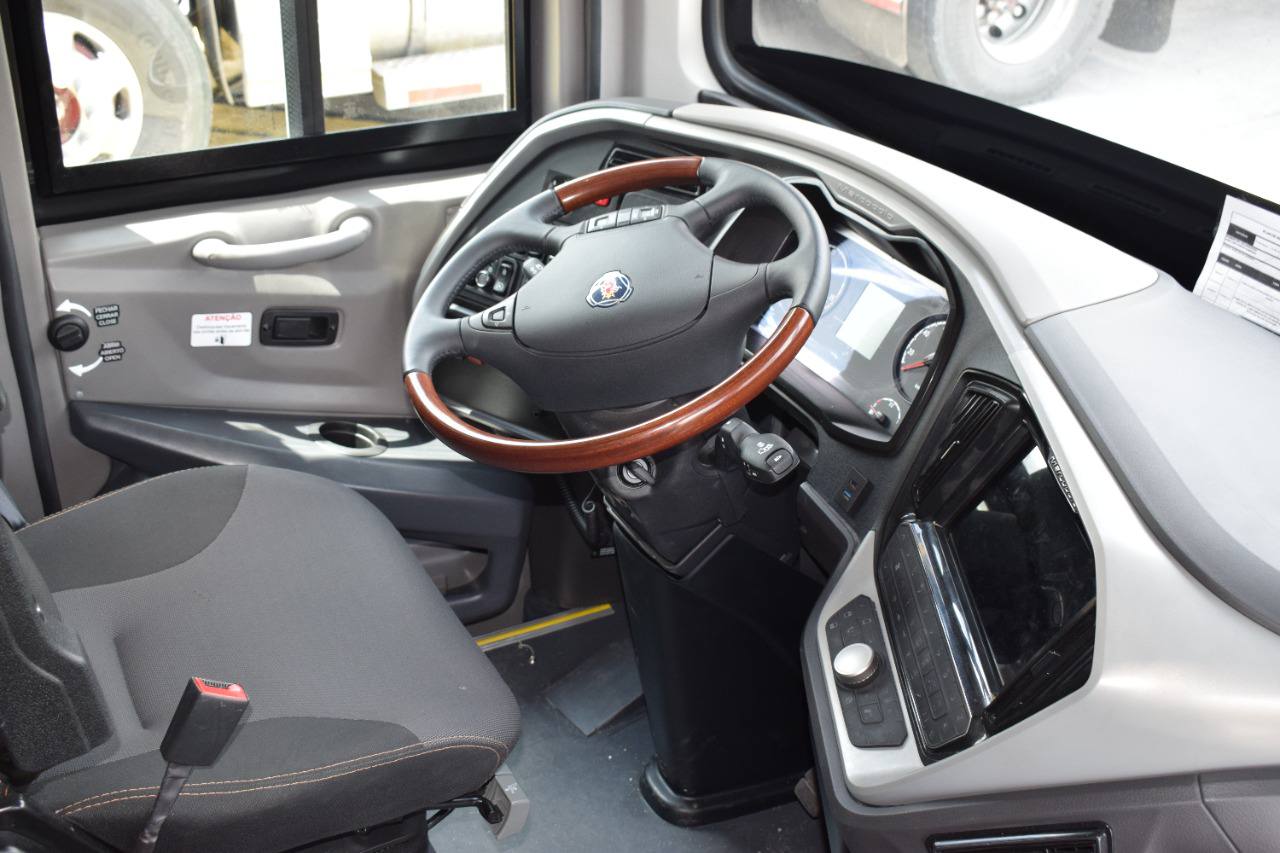 Since then, the daily question from our followers has always been the same: when will this new model arrive in our country? The unknown turned into intrigue, since most of the countries in the region began to open the G8 a few months after its presentation in society, despite the fact that, in many places, the Covid-19 pandemic had generated a strong recession in the transport sector and the possibilities of renewing units had diminished. Bolivia, Chile, Peru and even Ecuador appeared as the next destinations of the G8, but apparently, Colombia was not on the radar. What were Marcopolo's plans for the coffee country?

The previous generation of vehicles, called G7, has been, up to now, the most successful of the manufacturer from Caxias du Sul. Thousands of units circulate around the world since its launch in 2011, and the road line was manufactured not only in the plant in Brazil, but was also built in Mexico, Colombia and China. However, the policy of the parent company regarding the G8 was different: the vehicle had to be built exclusively in the Brazilian factory, and they made it known to the Mexican market by presenting it in their country in June 2022. So, how did they manage to the directives of Superpolo convince Caxias to allow the construction of the G8 in Cota?

The challenge was not easy, and the project began more than three years ago. For this, it was necessary to adapt our production line to the new construction conditions of the product, and thus, they managed to create a version of G8 adapted to the needs of the local market, capable of being assembled without significantly altering the existing assembly devices and incorporating the capabilities from local suppliers to achieve a competitively priced bus. “At the Caxias du Sul plant in Brazil, Marcopolo created an exclusive production line for the G8, completing five in total. "Our way of producing is different, since all kinds of products pass through the same chain, from a Micro Senior to a Paradiso 1350, and the G8 would not be the exception, so we had to adapt to this new product," he said. Juan Carlos Santamaría, Engineering Manager of Marcopolo Superpolo in an interview with Latinobus.

This is how, finally, and with the presence of the brand's main clients and the specialized press, the Colombian G8 saw the light of day at the Cota plant, in an event that, more than a simple product launch, served as a meeting space for transporters and service providers in the sector, bridging the gap imposed by the past pandemic.

If an automotive company must take care of something, it is its formal DNA; getting customers to discover that a product belongs to your brand, without having to read the logos attached to the vehicle; this is very well achieved in the G8, which, by miles, is understood to be a Marcopolo. Details such as the sharp silhouette, the extra-long mirrors, the short panoramic glass and the angular rear are family traits that have been preserved, to which are added advanced elements such as the new passenger door design with more glazed surface, the lower the body with volume, the wheel arches integrated into the sides, the full LED headlights (optional) and the new tiara in a combination of metallic finishes that give it a technological and futuristic connotation.

The new model has not only improved in aesthetics, but in functionality. The hold area has been optimized to achieve greater luggage load capacity than its predecessor, allowing much more comfortable passenger access and the installation of the cabin in the area between the axles, ahead of the rear train. As an interesting detail, the Colombian G8 is the first to offer a driver's door, which also has a comfortable ladder to allow the operator an easy ascent and disembarkation.

The vehicle, which can be offered in multiple configurations depending on the customer's needs, was presented in two versions during the event, differentiated by the level of finishes and accessories, although both are mounted on Scania K400 chassis and are 13.3 meters long. One of the prototypes was equipped with halogen headlights and a pneumatic driver's seat of North American origin, in addition to 40 seats and two bathrooms, while the other had the traditional configuration of 42 seats without leg rests, a single bathroom and an ergonomic operator's chair, luxury with built-in safety belt, developed in Germany by Grammer. The two options of panoramic glass, solid or split, were also shown with each model. 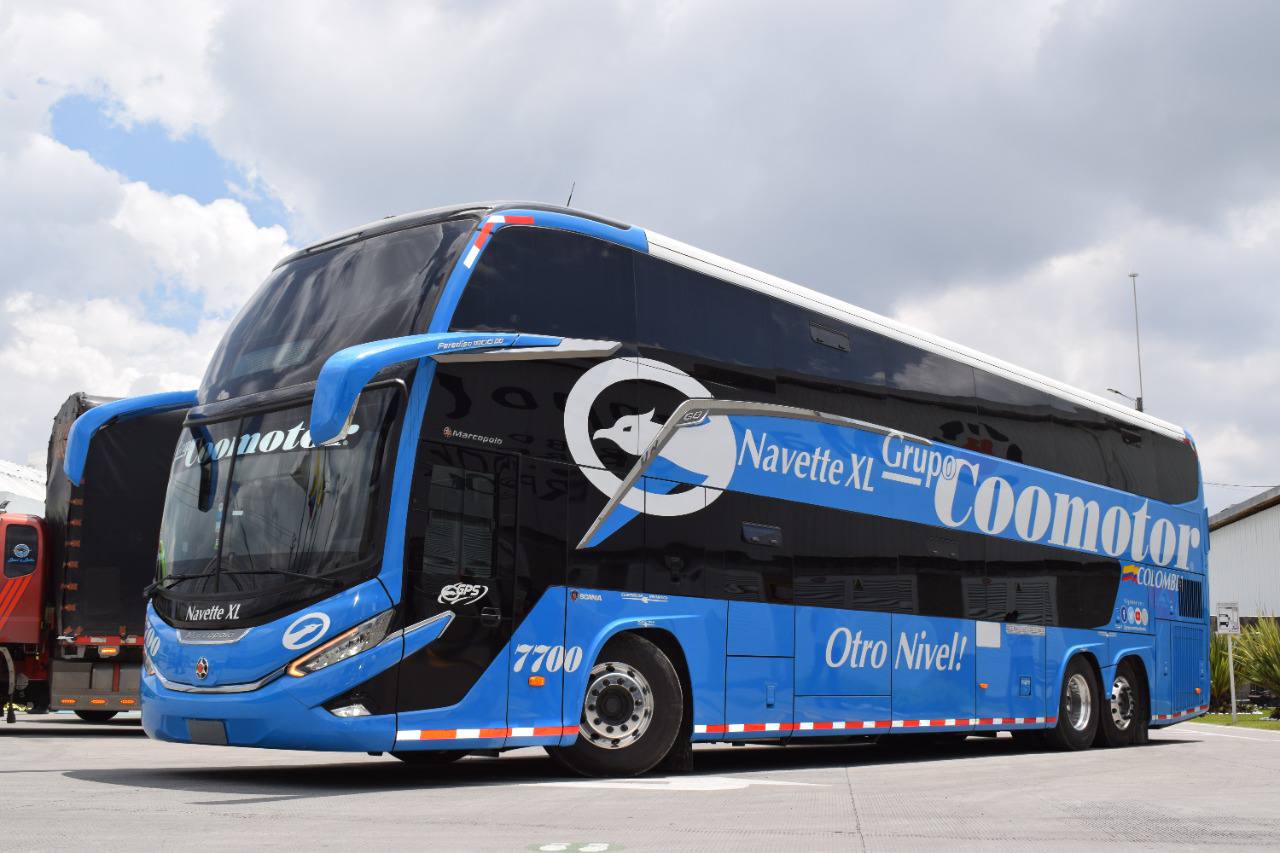 If the generation 7 proved to fully comply with national and international regulations, especially in terms of resistance tests, the G8 has far exceeded the ability to protect the occupants. Side windows are now 70mm smaller than on the G7, which lowers vibrations, increases structural rigidity, reduces the chance of passengers being ejected in the event of a rollover, and also helps reduce interior temperature by improving efficiency of air conditioning equipment. Added to this improvement is the development of a complex frontal structure that minimizes the injuries received by the driver and assists in the event of a collision, thanks to the design of reinforcements and programmed deformation zones that absorb the kinetic energy of the impact, tested by computer simulations and real crash tests carried out in Brazil.

Active safety has also been present in the development of the new model, combining an instrument panel with improved ergonomics, better visibility through the rear-view mirrors (which can be replaced by cameras to suit the customer) and the lighting power of the headlights and fog lights with LED technology.

The arrival of the long-awaited G8 not only involved an aesthetic and constructive romp. Marcopolo also listened to its buyers and took on the task of solving the main shortcomings of the generation it replaces. “Customers complained about water ingress, to which we responded that it would be better not to take the buses out while it was raining,” said Carlos Gutiérrez, Superpolo's Commercial Manager, jokingly. “To take away that headache, we changed the wrapping methodology on the G8, making a full canopy from the rear to almost into the uprights. This way we avoid sticking between pieces of fiberglass and we guarantee hermeticity” he added.

Another detail on which comments were received was about the adjustment of the luggage racks, one of the pieces that suffers the most with tracks in poor condition. “We have developed new PVC profiles and metal supports, in addition to moving the speakers of the audio system to the top of the pigeonhole; This reduces weight and vibrations, and we aspire to have a vehicle that satisfies customer needs,” said James Posada, General Manager of Superpolo during the launch evening.

Along with the two models made at the Superpolo plant, those attending the launch were able to see first-hand the Paradiso 1800 DD, also from the G8, in this case delivered to the Coomotor company from Huila. A vehicle that maintains the family traits of single-deck vehicles, in a proportionate and dynamic way, taking into account the greater height of the whole.

In the DD the biggest differences are inside, as it has a multiplex system with a larger screen provided by Actia, a cabin with entrance from inside and outside, super wide armchairs on the first floor, a coffee maker and a special lighting design, that will surely be the most desired positions by travelers. The second level has the same seating as the single-story models, bathroom and food preparation area, plus individual entertainment.